You are here: Home / Our Story / How We Took Action so My Wife Could Stay at Home

My wife and I recently hit a milestone where she finished working at her job and will be staying at home with our son.  This has been something we have been working towards for a little over 5 years and was a big reason why we decided to first pay off our $107K in debt.  We are also expecting a second son due this September so the cost of child care for 2 kids heavily factored into her leaving her job. 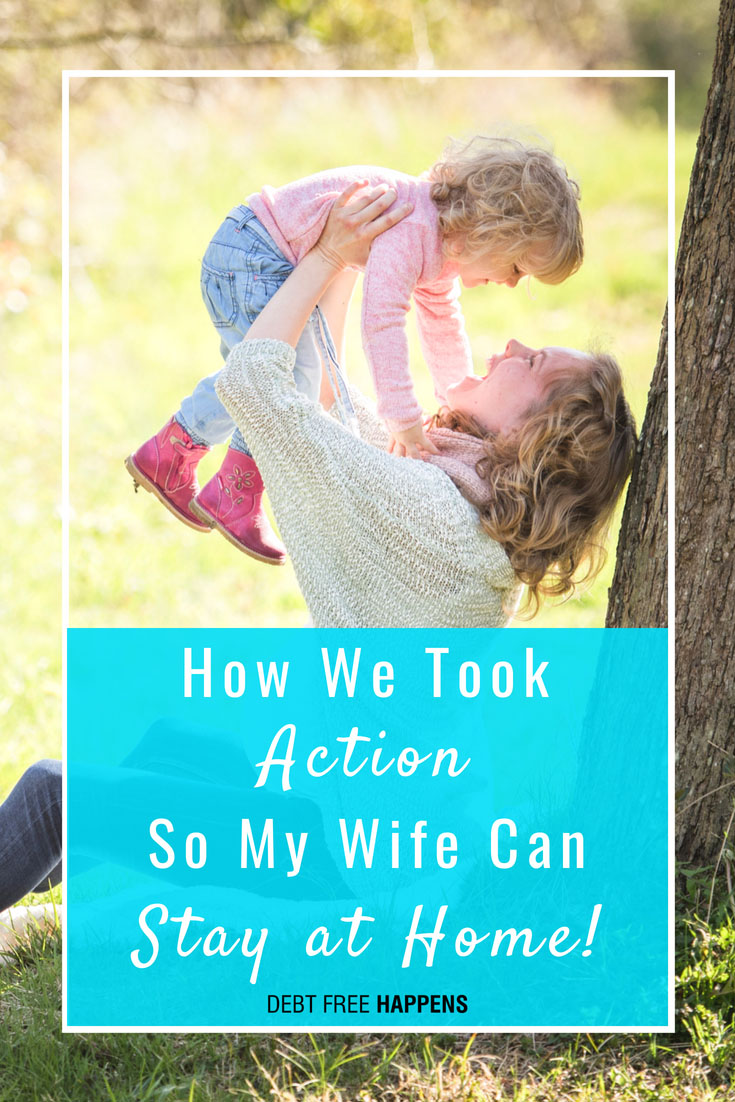 It has been an emotional week for Erin finishing up because of all the great people she will not be seeing on a daily basis.  It has even made me emotional thinking back to what it took to get to this point and reflect on all of the help and support we have received along the way.  As exciting as it is for her to stay home it is still a difficult decision when your job plays such a large part of your life and has helped her grow so much.  Even more so than succeeding at her job though Erin has always wanted to stay at home with our kids and when I see her interact with our son I am always in awe.  I have no doubt she’ll thrive in her new role which is really a promotion in my mind since she has done such a great job as Mom so far.

Erin will be writing a more detailed post from her perspective outlining the challenges she has faced while being a working Mom and making the decision for when to leave.  This is the decision we made for our family but there is no right or wrong decision when it comes to being a parent.  We all do what we feel is best for them and sacrifice along the way to be the best parents we can.  2 ½ years ago I made the difficult decision to leave my job for another company and it was really tough but I’m glad I did.  I have grown a lot and still have a great relationship with my previous company and am really proud of the projects we completed together.

When we got married almost 6 years ago we were struggling to decide what we wanted to focus on.  We were being told to buy a house, asked when we were going to have kids and if so would Erin stay at home with the kids yet no one seemed to care that we had debt.  Maybe because they didn’t know that we had $107K in debt.  It was mostly student loans with a $14K car loan thrown in a few months after getting married.  We didn’t feel any of that was possible with the debt we had.  Our minimum payments themselves were about $1,150 a month!  That is just the minimums!  We didn’t have any money for a down payment on a house and Erin was finishing up school and we weren’t quite ready for kids but we knew that these thing would be right around the corner so we had to do something.  Some of my loans were on a 25 year track and were going to be around when our future kids were in college.

About 6 months into our marriage we decided that we had to eliminate the debt as fast as possible first.  By doing that we would lower our overhead which would make it easier to save for a house and live on one income for when she decided to stay home.  My initial calculations were that it would take us about 5 years to pay off our debt.  That bummed me out a little but I didn’t let it stop us since I knew we would get raises although it took some faith knowing that things would improve.  We took it month by month but we were laser focused and ended up finishing in under 3 years.  This was because we received pay raises and bonuses but were singularly focused on paying off the debt and we had a pan for the money when we received it.

Once that was complete we took a trip to Nashville to do our Debt Free Scream but we just took that momentum of paying off our debt and piled up cash quickly for a 3-6 month emergency fund.  Erin also got pregnant around that time and we moved into a cheaper place that had 2 bedrooms.  We had previously been in a one bedroom on the top floor of a high rise that was not kid friendly.  We started to put 15% towards retirement and use the rest towards saving for a down payment for a house.  We were basically saving about 50% of our income during this time.

Getting into a house was the final piece since it was really important for us to have something that was ours and that we could be in for a long time.  It needed to work for us in the short term but also have potential to upgrade as well (I am an Architect after all).  After about 18 months we had enough money saved to put 10% down (avoided PMI) and have enough left over to address any improvements and have extra security since being a homeowner has additional responsibility.  It also acts as additional emergency funds since Erin is not working anymore.  We found a great home that is close to family and has lots of potential while being in great shape currently.

Basically, we are just looking for a simpler life.  With Erin at home it allows us time to get more organized and focused, have more fun on the weekends, spend time on Debt Free Happens and most importantly spend time with our son and baby #2.

It has been a long road in a way but it also went really quick.  It has been a blast working together and seeing what we could do as a team.  We are so thankful for our beautiful boy and our families which have helped with babysitting and making it possible for Erin to work.  It is easy to take these things for granted because we recognize not everyone has these things but we made the most out of them by putting our plan into action.

The whole point of this post is to help you realize that if you want to make a change in your life you can absolutely do so.  Don’t limit yourself.  We easily could have just let the debt defeat us and let 5 years pass with no progress.  Instead we focused on the long term goal and made small strides towards it each month.  That quickly added up to success and in the meantime we were always improving our situation.  Our lives have improved dramatically and now no goal seems unattainable.  Sure, we gave up some stuff along the way but by reprioritizing our goals we gained so much more since we are happier and less stressed and that might be the best part of it all.

This site uses Akismet to reduce spam. Learn how your comment data is processed.